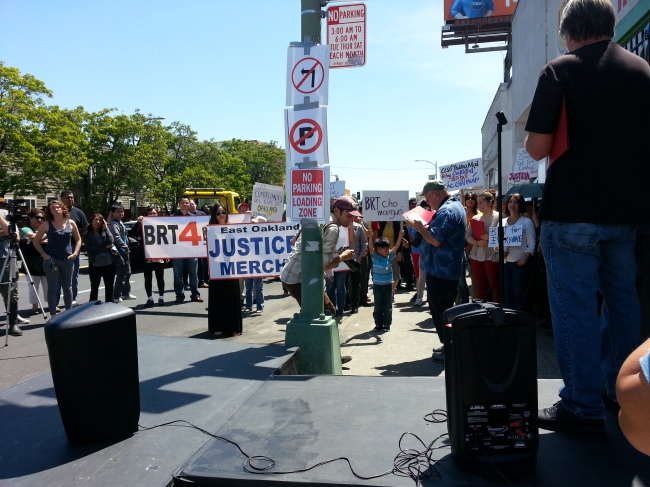 International Boulevard in Oakland is home to a variety of local businesses that represent the ethnically, culturally, and economically diverse population that is the heart and soul of this working-class city. The majority of the residents and business owners along this corridor are minorities, who have struggled to build their businesses and homes in an area that has suffered from disinvestment, crime, and poverty. They have not only survived, but thrived despite the city doing nothing to improve the conditions in these affected neighborhoods.

It should come as a surprise to most, when all of a sudden the City of Oakland wants to invest upwards to $200 million dollars for a “Transit Oriented” infrastructure, promising to bring new jobs and customers to the struggling districts along International Blvd. They say they will clean up the streets with new lighting and pedestrian safety features, foot patrol officers, and improved transit stops. The highlight of their plan, is a Bus Rapid Transit (BRT) project modeled after those in South America, Asia and Seattle. Oakland’s Mayor Jean Quan told us at a meeting last week that they plan to build new 5-story mixed residential and commercial buildings along the corridor, replacing the existing commercial, light industrial, auto work, and warehouse businesses that are already present. These new buildings will provide Median and Market level housing, translating to higher rents for both the residents, and the businesses renting in the corridor. They are saying it’s good for the city… but what I am hearing, is that it is good for the REST of the city, and not those folks already making ends meet in the affected areas. Call it whatever you want to call it Mayor, but however you dress it up – this is Gentrification.

The Mission District used to be my favorite part of San Francisco. Home to some of the best Latin dive bars and South American food in the Bay Area, it was vibrant, multi-lingual, dirty, and beautiful. Murals and graffiti adorned every surface, street vendors abounded, churches, Panaderias, local Latino merchants, fortune tellers and South American restaurants lined the blocks. The streets were teaming with large families heading to and from school and work, the pulse of the Mission district. The aggressive anti-gang campaigns and influx of spending on transit and bike infrastructure along the corridors – coupled with some well-timed “accidental” apartment fires, saw the Mission district along Valencia and the 24th street corridor completely transformed in the early 2000’s. Brand new million dollar condos attracted the hordes of dot-com techie types with their mounds of new money… and soon single family market rate housing was replacing what once were 7-20 apartment units in a building housing dozens of blue collar wage earning families. Instead of the crowds of longtime residents gathering outside of church or dining in the local Latin diners, the street was filled with hordes of hipsters waiting for a table to enjoy brunch at the hippest places in town. What was once a dominantly Latino neighborhood, has become decidedly WASP, with quaint “elements” of what once was serving as conversation pieces for the neighborhoods new residents. Now you can’t spit without hitting a single-origin coffee shop in the Mission. The character of this district changed overnight – and with it the way of life of the longtime residents.

With commercial and residential rents going through the roof, the Mission’s inhabitants have now been forced to relocate. They have had to make the difficult decision to move their homes, businesses and family’s to wherever they can now afford to live. Some have had to travel as far as Stockton or Fresno to find reasonable rents. Though all the transit upgrades and infrastructure improvements were touted as a “win” for the transit reliant residents of the Mission, it was actually a well-worded campaign to force these people out of some prime real-estate highly coveted by developers. They have made way for a more lucrative demographic to take hold in this newly gentrified urban neighborhood. A neighborhood soon to be void of people of color, a neighborhood lacking the character and diversity that it was once most closely identified with.

I know this is nothing new to most of you. Those who have lived here longer than me probably have seen it happen over and over again in areas that I have always seen as affluent in my 11 years as a Bay Area resident. The SOMA, Tenderloin, Polk, Fillmore, Temescal, Emeryville, Ashby, Uptown… all areas completely ignored at one point by law enforcement and city officials. Now they are among the most desirable neighborhoods in the Bay – with median rents that nobody in my inner circle could ever hope to afford. The people previously living in these neighborhoods created businesses and families – with the odds stacked heavily against them. They faced violence, crime, and a disintegrating infrastructure… while receiving only apathy from the civic leadership and law enforcement. Still they have thrived. They have created a neighborhood where they feel at home, carved out a place for themselves despite it all. And now, they stand to lose it all. With significantly less resources available to them than the new residents the city hopes to attract… what are they expected to do? Are they expected to relocate on their own dime? To resettle in a place with an unsure customer base, without the community and friends they have strove to develop over the course of the generations they have been there?

I hear again and again – from Mayor Quan’s mouth, from developers and politicians…. That the businesses along these corridors are not viable in the new economy. Truth is, they are viable. They have been viable for decades now. Some have even been passed down from generation to generation. They have been successful and self-sufficient. If it weren’t for an interest in the land they are sitting on… they could have gone on thriving in peace. But just like the Europeans once did the Native Ohlone in the region… these residents are now being forcefully pushed from their homes, the business owners having to relocate. By removing their customer base, doubling and tripling operational costs and breaking up the community they belong to – it is the City and its governing body that are seeking to make these businesses un-viable.

It won’t stop here. This BRT involves re-zoning. Watch carefully, and you will find a whole plan about to be set in motion. The influx of people will lead to re-districting. What once was a powerful minority voting block, is going to be split up… interrupting the growing political power that this community has been developing. It is all part of a bigger plan. The Oakland 10K Two Plan. Will you sit silently by and watch it happen yet again? I can’t sit idly anymore. Tell everyone what’s going on. Tell Mayor Quan that Oakland belongs to the People of Oakland, and is not to be bought and sold to the highest bidder. Say something before it’s too late.