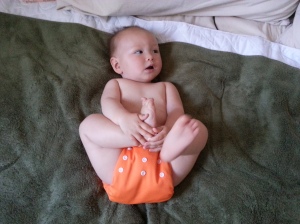 One of our very first cloth diapers

I will admit that when I first found out that I was pregnant, I had a pretty long list of “things that I would never do” as a parent. Some of these things were not well thought out, but some I believed really were. Many of the things on that list have long been disregarded once the reality of parenthood actually sank in. Others went out the window from the very first week… while others slowly trickled down through my parenting philosophies and soaked the floor of my reality slowly, taking me before I knew I was being taken. One of those “things I said I would never do and then later ended up doing”… was cloth diapering. 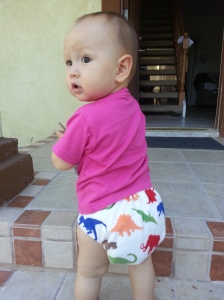 You would think as a longtime Berkeley resident and former Greenpeace activist that I would have started out my parenting journey as a cloth diaper advocate. It is sometimes embarrassing to admit I didn’t start out in cloth. Truth be told, it was a really intimidating process for us. Before giving birth to my daughter, I had no friends with children. The community of bar flies and dykes that I called my inner circle, already thought I was bat-shit crazy for deciding to procreate in the first place… so of course none of them were going to make any pointed recommendations as far as how I should feed or clothe my child. Without knowing anyone who was doing it, I had no point of reference for what it could look like in real life. I thought cloth diapers were those old-fashioned towel and safety pin looking things. What a daunting thing to deal with! And knowing nothing yet about exclusively breastfed infant poop and its lack of offensive odors, I couldn’t understand the logistics of what the hell you were supposed to do with the dozens of crap filled rags you were going to be accumulating. Plus, we lived with our in-laws, and we shared a communal (brand new HE) washer. How in the world was I going to convince them to let me fill it to the brim with shit-catchers? Basically, it made no sense to me at all. I wasn’t trying to prove anything… I just would use what everyone else was using.

Checking herself out in the mirror. These generic diapers were actually some of my favorites.

As my journey through parenthood progressed, I gave up my weekly parenting circle at the DayOne, and I eventually found myself buried neck deep in both a local La Leche League group and an active Babywearing International group. As it turned out, cloth WAS what everyone else was using. Every one of the friends that I made in that first year, had been cloth diapering their baby from birth. The diapers in no way resembled the rags from the old movies, and safety pins were replaced with these little things called a “Snappi” that were way easier to wield around an infant than a seemingly lethal 2 inch long pin. Some diapers didn’t even need the pre-folded fabric and Snappi, they just had a pocket you could stuff an insert into, and they fastened with snaps or Velcro. When we would change our kids diapers side by side, they were adept at using them and would spend no longer than I would getting them on. And then I discovered Wet Bags and was again totally surprised to find out that they make bags these days that can somehow miraculously contain the smell emitting from the spent casings. You can put the soiled units back into your diaper bag, and nobody is the wiser for it. Color me impressed. No matter how easy they all made it look though, it didn’t really make much sense to me to go out and buy a stash of cloth diapers when my kid was nearing a year old. We would be out of diapers soon anyway, right?

Did I mention my mama is a Babywearing Educator?

I mentioned earlier that I didn’t have any friends with kids, right? Yeah, I still didn’t know too many people with toddlers. I knew nothing about potty training a kid, my mom had always told me I had potty trained myself at 18 months. Well, the more and more I started to interact with moms in these groups and meet their older children… slowly some of the realities of parenting a toddler were beginning to sink in. My child could possibly be in diapers for a lot longer that I had originally anticipated… A lot longer. This realization, combined with us suddenly running out of the 10 months supply worth of Diapers (in the form of Target Gift Cards from our Baby Shower) caused a slight panic within us. With only one of us working full time, money was a little tight. At around $35 a box, we were looking at upwards to $1,000 a year for diapers. What if she was in diapers for 2.5 more years? It really started to add up in our heads.

I went to Amazon to search for some cheap cloth diapering options just to ballpark what it might cost me to get into it. A week later, our first cloth pocket diapers came in the mail. They were some cheap off label brand, they weren’t much to look at, but at $4/each… I was pretty excited about them. We started with about 6 diapers. I naively thought we could use them all during the day, then wash them at night while she was sleeping and use them again the next day. Ha. Again, reality hit. Ouch. We just went ahead from months 10-12 fiddling around with cloth here and there, and were thrilled by the few diapers we were saving. Felt like cash $ in my pocket every time I tossed a wet cloth diaper in the pail instead of a disposable. It wasn’t until my daughters First Birthday Party that we solidly committed to cloth diapering, asking friends and family for some cheap Alva Baby pocket diapers in lieu of birthday gifts. Our stash grew to 20 and we were finally able to start diapering more frequently. 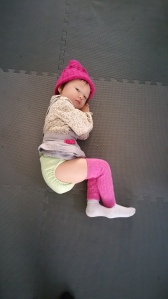 Tired toddler in some Bum Genius

There were definitely some challenges. We often had leaks, and had to carry so many changes of clothes when we went out. The diapers were bulky and took up lots of space in my bag. We only had enough for 3 days, so we would always go 3 days on cloth, 2 days on disposables while I washed the cloth. But with only about $150 invested, we were saving tons of diapers every week, and I felt so so much better about the quantity of diapers we were contributing to landfills… this nagging thought I always tried to ignore but the environmentalist in me would never allow to be forgotten. Despite the trials, there were things I thought would suck, but didn’t end up sucking so bad. I remembered being so concerned about my in-laws being on board, but turns out… if there is one thing that your thrifty old school Father – In- Law can appreciate, it is saving money.  He thought it was a brilliant idea, and was almost proud of me for coming up with it. Everyone was on board. Almost a year later a friend of mine gifted me another dozen cloth diapers secondhand, and then we finally began full-time cloth diapering. It was actually quite liberating to never have to “panic” when the diaper supply was dwindling. We got brave and stopped buying disposables for road trips, opting instead to just take our cloth if space allowed for it. We got better at dressing our toddler so that leaks were not an issue, and we absolutely loved watching her fluffy little butt running around the house in the cute little prints. People would always comment on them, and I was happy to talk about them. I am so lucky to have made such amazing friends who patiently educated but never pushed me, who let me discover the fun of cloth diapering without judging me for not already knowing about it, and for always being there to answer my lazy text messages asking how to get lingering blueberry poop stains out of the fabric when I could have just Googled it. 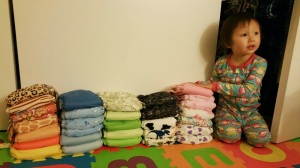 Dragon Baby shows off her “stash” one last time

Today, my daughter is about a month away from her 3rd Birthday. This last week she has basically potty-trained herself with pretty limited effort on our parts. This evening we lined up all her diapers and sorted them by colors and set them out for her to take one last “stash shot” with. She smiled proudly next to her baby diapers, and asked for a photo. She then helped me take the inserts out of all the diapers that I had just lovingly stuffed almost a week ago without knowing she would never use them again. She helped me to pack them up into a box to store in the garage for the sister or brother she one day hopes she will have. We both smiled proudly at each other, and she asked me “Mom, are you a little bit sad? I am such a big girl now.” I was a little bit sad. My diapering journey with her was finally ending. It was such a microcosm of the larger picture of my parenting journey. One of many crafts I have learned from my village of mamas. One of many milestones we have passed on the journey from babyhood to toddlerhood. One of many lessons I have learned about being authentic to my true self in order to truly enjoy parenthood. My cloth diapering experience has been one of many hot, smelly doses of reality I have had flung at me in the last few years – one more thing to cross off the list of “things that I would never do”.