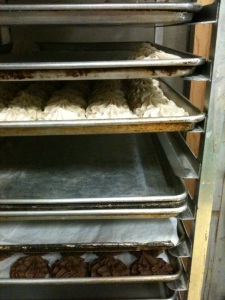 I had the unique opportunity yesterday to lead a tour of 13 Middle School students from Antioch through Berkeley’s “famed” Gourmet Ghetto. They are reading the young adult version of Michael Pollan’s Omnivores Dilemma and had also recently watched parts of Food Inc. in their class. I honestly felt a little bad for them. Having just finished reading the book myself, I know how heavy the content matter is, and it was so evident in the questions they asked throughout the tour. Some highlights were: “Do you know exactly which farm your meat comes from?”, “How do you keep food borne illnesses from making everyone sick in such a small kitchen?” “Why aren’t those cooks wearing hairnets?” and “How can they make so much money in such a tiny space?” Despite their naivety, they were a bright group of kids. Many of my adult friends don’t even ask questions about the food they are eating, what they are putting into their body on a regular basis. Maybe we should be taking lessons from them.

We stopped inside Saul’s Jewish Deli, a recent favorite of mine, for a sample of Pastrami and some Home Made Cream Soda. Remarkable as always, on Acme Wheat Rye, the REAL stuff, not that white rye crap they have been serving me since childhood. Not a single thing on the plate except the meat and the bread, a jar of mustard and a knife the only place settings. They ate every last bite. One of the owners Peter told them all that his restaurant keeps over 100,000 plastic straws from going into landfill every year by paying extra for paper straws. He totally blew their minds. When he mentioned that the homemade soda from the vintage fountain saves about 50,000 bottles and/or cans a year… they were suddenly enraged at every other restaurant. On the way out of the building, one boy remarked to me “That was the best soda I have ever had in my life. It tasted like they melted ice cream into a cup and carbonated it.” I laughed and told him it was real sugar instead of high fructose corn syrup, and he told me that he probably never had soda with real sugar in it before. Probably.

If there is one stop I can say I was most excited by on the tour, it was our brief visit to Chez Pannise. Its been, like, my wet dream to go inside that place for many years now… and finally! I had a legitimate reason to walk inside! They couldn’t kick me out this time, I was with the crew! (I want to clarify that I have never been kicked out previously… I just always assumed I would be from the first time I saw their $95 pre fix menus). That restaurant is truly stunning. The interior was mostly designed by Kip Mesirow throughout the 70’s, and it is very reminiscent of Frank Lloyd Wright, with its stunning Japanese woodwork, copper fixtures, and clean symmetry. I heard little of the first 5 minutes of their talk, I will be honest. I was transfixed by the amazing décor. They told us that they changed the menu twice daily depending on whatever the farmers bring to their door… and I about died. How they can accomplish what they do in that tiny open kitchen is beyond me. I watched the army of cooks milling around the small space, and my mind was sufficiently boggled. Almost as boggled as the kids were when on the way out I picked up a menu to show them and they saw the dishes starting at $75 a plate… and up. Their mouths dropped open, and I explained that the cow we were going to be eating was well worth that money if you really thought about what it takes to really raise a cow. Surprisingly, they all agreed.

The 30 year aged Fiscalini Farms Raw Cheddar Cheese we tried @ The Cheeseboard was amazing! But not as amazing as the fact that they created a Methane Recycler that powers 100% of their operations, and supplies the power grid for much of their surrounding city. Turning manure into electricity? What a bunch of geniuses! The kids thought it was hilarious.

What I thought was hilarious is when out of nowhere, this mid 70’s model Mercedes convertible came rolling through the busy intersection at Vine and Shattuck and crashed into a pole in front of Sam’s Produce Center. Its only funny, because there was nobody inside. We all ran to help and some people called 911… But the only occupant of the car was a Border Collie, and he looked even more confused than us. While we all stood around trying to figure out what to do, an old woman with “tinted” maroon hair emerged from Cheeseboard with a slice of pizza in her hand, and asked us “What the hell happened?” We started to explain to her what we saw, when she reached for the door of the car and opened it. “Oh, is that your car?” Someone asked, but before he could even get it out, she was in the car – fleeing the scene of the crime. Every cop in Berkeley was there in 2 minutes time… but all we could do is scratch our heads and retell the story. The dent in the pole was the only thing to convince the cops we weren’t lying… and they were all pissed we didn’t get the license plate number. Hell, I’m pissed too.

The night ended with a bang, when Cassie and I were invited by our friend Sebastian to go tour the bakery he worked for, Phoenix Pastaficio where his boss was working. We were shocked anyone would be working in the bakery at midnight, but he assured us that the owner, Eric Sartenaer, would be there. Sure enough, there he was. Wrapped up in white aprons, a beanie and a wool scarf his mother knitted him, he was there blaring music and baking cookies in the middle of the night. Eric was one of the original members of The Cheeseboard, and was instrumental in helping to start many other restaurants and bakeries in Berkeley and SF. He was a charming guy, reserved but so positive. He had a wide smile on his face and his eyes sparkled. He let us snap pictures of the macaroons laying out of the trays, and invited us back to visit anytime. We laughed about the new Gluten Free phenomenon (with Cassie and I both abhor), and he laughed with us and assured us that like every other food fad, he knew that would also pass. It always baffles me how the people who have the least to give, are always the most generous. He gave Cassie and I fresh baked cookies and pounds and pounds of his homemade Whole Wheat Pasta. Sebastian and him disagreed on the cooking times, but I took Eric’s suggestion of 3 ½ minutes, and it was al dente perfection. A little Puttanesca from Soop that I made myself, and I had the most amazing late night snack when I finally made it home last night around 2am. Another amazing evening in the company of culinary greatness.

Follow Eating & Being Me on WordPress.com
Join 82 other followers